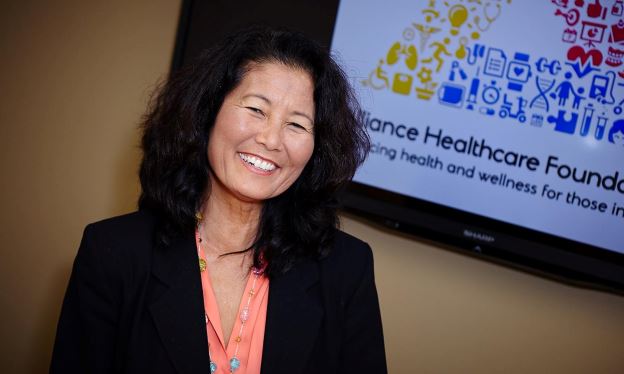 How a nonprofit turned bad news into a fantastic rebrand

When Nancy Sasaki joined the Alliance Healthcare Foundation (AHF) in 2011, she heard that the community was confused and uncertain about funding priorities, despite its mission to help the disadvantaged gain access to healthcare in San Diego and Imperial counties.

But Sasaki, who worked for Planned Parenthood for 30 years, emailed a survey to current and past grantees, vendors, and other organizations to find out the extent of the confusion and to hear recommendations from the community on how to fix it.

“The survey came back really blasting us,” she said. “There were comments about our board of directors, our funding priorities, and our lack of presence in the community.”

While the nonprofit’s tagline was “Improving access to healthcare”, AHF would also fund things like community gardens and training programs for recently released prisoners to help them find a job.

The survey results also revealed the community was confused about how to get a grant from AHF. Processes the previous year had been unexplained and unclear to the community.

Sasaki held nothing back from the community. Instead, she released the results at an open forum. And then she got to work.

To help her rebrand AHF, Sasaki hired Ideahaus, a creative communications agency, and one of the first things they tackled was the tagline. It’s now “Advancing health and wellness for those in need,” which more accurately describes the broad services that AHF funds in the community.

They changed the logo. The new logo is a triangle, which is also delta symbol, which indicates change, something AHF represents. It also has health-related icons in it, which shows that AHF is responding to the community’s feedback.

“My perspective was to be a much more community-oriented, community-facing organization,” Sasaki said. “It wasn’t about us. It was about the work our grantees were doing and that others were doing in the community.”

One challenge for Ideahaus, she said, was that it wanted to promote the client, AHF. “But it wasn’t  about AHF.  It was about who we were working with and who they were serving.”

Taking that into consideration, Ideahaus redesigned AHF’s corporate-looking website so that it better reflects its grantees, and particularly the homepage, which showcases the diverse organizations it serves. The nonprofit also evaluated which social media platforms would align with its new strategy, and started using Facebook, Twitter, and LinkedIn, as well as publishing blog posts on the website.

Changes were made to the funding application process as well. Each applicant was asked to submit a two- to three-minute video in which the leaders of their organizations would talk about what they hoped to achieve with a grant. AHF received 114 applications, and all of them had video, which AHF posted on social.

Those videos not only helped educate the community about the work of different organizations, but also acted as a reward to each applicant, to see themselves and their stories shared online. Once the board decided which organizations would receive grants, the winners’ videos were posted again.

Other ways AHF helps highlight the community is by hosting two events a year for CEOs or executive-level members of nonprofit organizations to encourage networking and talk strategy, but also to position AHF as a health and wellness supporter.

What People Are Saying Now

AHF conducts surveys every two years, and since that first one in 2011, the situation has vastly improved. People are now saying great things about AHF.

“They see me and the program officer out in the community, and they feel like we’re listening to their needs, that we’re doing so much for their organizations.”

As for the confusion in the community? “I love talking with people about the work they are doing and listening to their concerns. This job really speaks much more to what I thought I was going to do when I grew up,” Sasaki said. “It really is my dream job. I’m lucky.”

Are you a non-profit whose outreach leaves room for improvement? Would you like to find out how to make your company more purpose-driven? Then attend San Diego AMA’s 2016 Cause Conference™ May 19. You’ll discover how successful brands and nonprofits are connecting with and engaging today’s purpose-driven and socially-conscious consumers, contributors and employees.

Bonnie is a professional copywriter at Hear Ye! Writing, specializing in case studies, white papers, articles, blogging, web content and ghostwriting. When she’s not writing, you can find her hiking around San Diego, reading about the Founding Fathers, or planning her next trip in the camper with her husband.

THE LANDSCAPE OF E-COMMERCE MARKETPLACES FOR ONLINE SELLERS

According to Statista, e-commerce will account for more than $6 US billion dollars in...